Instant Win (Vincita Immediate) gives you a 1 in 500 chance of instantly winning a prize, every time you play SuperEnalotto. Available to both retail and online players, this feature is played at the point of purchase and does not affect your chances of winning a prize in the main SuperEnalotto draw.

Once you have completed and paid for your SuperEnalotto entry, you receive a game receipt, featuring a Magic Square (Quadrato Magico) containing four random numbers.

Here is an example of ticket that has won the Instant Win prize: 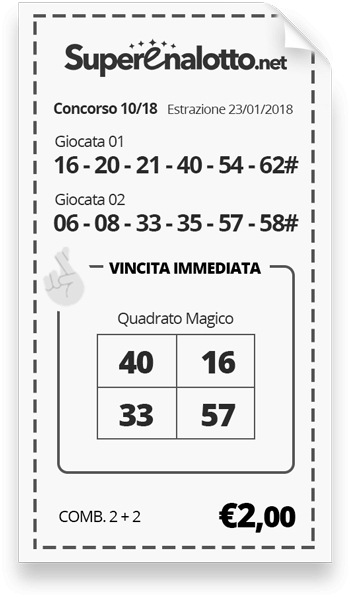 In total, one ticket in 500 purchased wins the €25 instant prize ahead of the SuperEnalotto draw, corresponding to 8.4% of the prize pool.

Although this win rate and payout is set, the lottery operator can apply to the government to change the Instant Win prize to any figure between €25 and €1,000, and at any frequency between 1 in every 100 sold to 1 in every 20,000 sold.

To remain eligible to win in this game, you cannot play a system entry using more than 80 different SuperEnalotto numbers.

With each validated game receipt you can make no more than one instant win, unless a game containing more than 500 different combinations has been validated.

You can also win instant prizes in the SuperEnalotto WinBox feature. This is available at no extra cost for anyone who plays SuperEnalotto with SuperStar.

As well as the €25 prizes that are based on the Magic Square, you can win prizes of up to €500 straight away by using the SuperEnalotto app to scan the QR code on the game receipt. You can also type in the 22-digit serial number on your ticket if you prefer. If you play online, you don’t have to do anything and will be informed automatically if you win.

There are also Second Chance draws with WinBox, offering prizes of up to €500 after the SuperEnalotto draw has taken place. View the WinBox page for more information.

How to Claim an Instant Win Prize

As the name of the game suggests, Instant Win prizes can be claimed instantly. When you play at a retailer, you can either collect your winnings straightaway or wait until after the main SuperEnalotto draw has taken place, in the event you also win a prize in the main draw. When you play online, the amount is automatically credited into your online account.

As with all SuperEnalotto prizes, claims must be made within 90 days of the draw date.